Merchant Navy a boon or a curse?

Here’s How To Join The Prestigious Merchant Navy

A merchant navy or merchant marine or mercantile marine is a term bestowed to the fleet of merchant vessels that are registered in a specific country. King George V bestowed this title on the British merchant shipping fleets after the First World War that ended on November 11, 1918 that resulted in the birth of British Merchant Navy. The birth of the modern Indian Merchant Navy occurred in 1919 when SS Loyalty sailed from India to Britain.

Role of a merchant navy officer
Merchant navy officers were earlier employed by commercial shipping companies to work on all kinds of maritime vessels, such as cargo ships, cruise liners, hovercraft, and tankers.The role was of a typical deck officer or engineering officer is not as an individual but in a team leading capacity.The team include seafarers of different ranks to perform various roles, and sometimes include members of maritime trade unions.

Job in merchant navy
The job as a merchant navy officer is considered one of the prestigious jobs in India, but its goodness depends on many factors. Someone can make an impressive career by joining Indian merchant Navy, but a family life is disturbed in this profession. As a merchant navy officer, an individual has a tough-time as he is required to remain on the ship sometimes for several months without a chance to meet the family, and this carries a higher risk when you’re into the sea for a long time.

Career in Indian Merchant Navy
If you don’t want to pursue higher education after 10th or 12th, you can make a plan to join merchant navy after 10th. This would be a good career both monetarily and for social status. You can get a handsome salary package when you’re too young that you may not even earn with high qualifications. 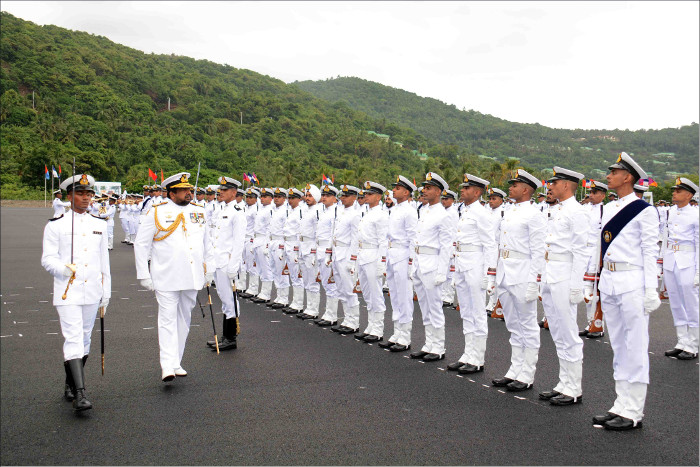 You can proceed with looking for admission to merchant navy after 10th or 12th standard. The special courses are offered by many training institutes for the merchant navy job training or merchant navy colleges in India.

Admission to the courses to join Indian Merchant Navy
Two courses – General Purpose (GP) Rating and Diploma in Nautical Science (DNS) are meant for those possessing educational qualification up to 10th and 12th respectively. However, for DNS course, a person should be a science student and must have secured minimum 45% marks in Physics, Chemistry & Math (PCM).

The individuals who have passed 12th standard and are not above 25 years of age can also seek admission in B. Tech program. A lateral entry is also allowed in this program for those who have graduated or completed the first year of engineering from an AICTE recognized Engineering College in India or completed Production Engineering or an Advanced Diploma in Die Making. B. Tech program is offered in many fields such as marine engineering, Naval Architecture, and Petroleum Engineering.

There is also an opportunity to join B. Sc. (Nautical Engineering) and B.E. (Marine) Engineering / Naval Architecture for those who are interested in graduation.

Admission details
The complete details of eligibility criteria and admission dates can be checked online on the website of the institutes that offer courses to pursue career in Indian Merchant Navy.

5 Career Advice To Consider After 12th

A look at the scope of Merchant Navy Courses after Graduation

Merchant Navy- A Sea Of Dreams just waiting for you now